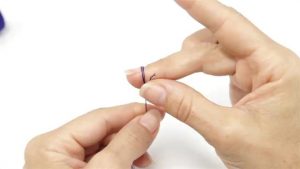 Almost all sewing projects no matter how big or small usually start with threading a needle. To make this starting step easier, work with a needle that’s large enough for your thread and trim the end so the fibers don’t poke out of the needle’s eye. Once you’ve got the thread through your needle, create a quick knot at the bottom. Then, you’re ready to sew!

STEP 1: Inserting a Single Sewing Thread Through a Needle

1. Choose a needle that can accommodate your thread’s thickness.

Once you’ve picked out the thread for your sewing project, look at several needles and hold the thread up to a needle’s eye. The eye shouldn’t be narrower than the thread or you’ll have a hard time threading the needle.

Did You Know? The opening of the needle where you insert the thread is called the eye.

3. Insert the end of the sewing thread through the eye of the needle.

Variation: You can fold the end of the thread over to make a small loop. Then, push the tiny loop through the eye of the needle.

5. Pull the thread through the needle to create a tail.

You can use more than this depending on how much thread you need for your project. Keep in mind that you’ll be folding this in half, which is why you should start by pulling out about twice as much thread as you’ll need.

2. Fold the thread in half and hold the ends together.

Pinch both of the thread ends together between your thumb and forefinger. This will fold the thread in half evenly so it’s a double strand.

Tip: You’ll have an easier time handling the thread and getting it through the needle if you’re working in a well-lit space. You can sit right next to a lamp to get the best lighting.

3. Push both ends of the thread through the eye of a needle.

Imagine you’re threading the needle as usual, but ensure that both ends of the thread go through the eye of the needle.

Then, take both ends between your thumb and forefinger and pull the thread until the needle is about 4 inches (10cm) from the loop end of the thread.

4. Pull the needle through the loop to make a tight knot.

1. Wrap the thread end around your middle finger

Tip: To create friction that makes it easier to tie the knot, lick your thumb and middle finger or dip it in a little water before you wrap the thread.

2. Roll the thread 2 to 3 times to create additional layers for the knot.

Keep the thread between your thumb and forefinger. Then, slowly roll your middle finger towards the base of your thumb.

3. Pinch the rolled thread between your fingers.

Instead of letting the rolled thread slip off your fingers, keep your thumb and middle finger firmly pressed down on the thread.

4. Pull the thread tightly to create the knot.

Keep your fingers clamped down on the thread while you use your other hand to pull the length of thread in the opposite direction. This will form the end of the thread into a knot.

Variation: If you’d like to make a neater knot, especially if you’re working with thick thread, you can insert the end of the thread through the loop that you wound around your finger. Loop it through another time and pull it to create a double overhand knot. 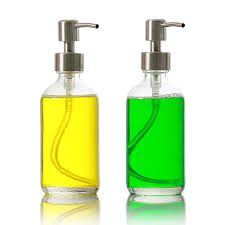 Guide on How to produce Multi-Purpose Liquid Soap 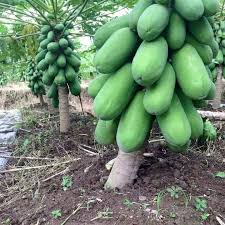